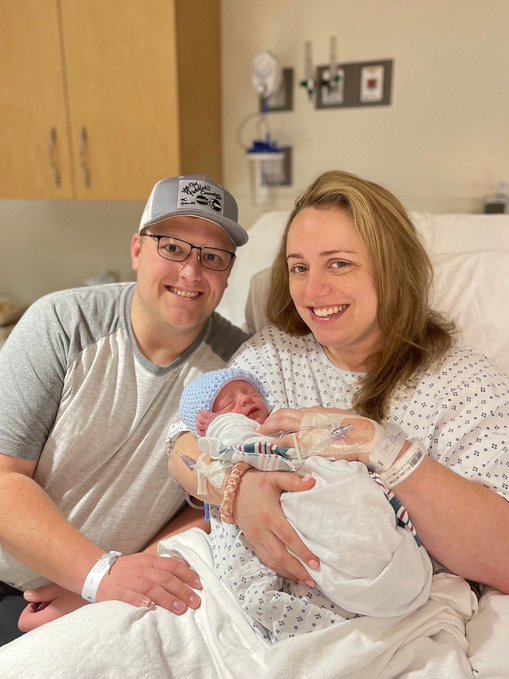 RICHMOND, VA – This morning at 9:49 AM, Theodore Rhett was born to Wren and Britt Williams at Henrico Doctors’ Hospital. Rhett weighed in at 6 lbs, 11.9 oz and measured at 19.25 inches.

The following statement can be attributed to Delegate Wren M. Williams:

“After nine months of eagerly waiting, Britt and I are overjoyed to welcome our firstborn son, Rhett, into the world. We have been so excited to meet him and we’re glad to say he’s arrived safe and sound. The gift of Life is truly precious.

“Now as a family of three, we are looking forward to seeing you all soon!”

Wren Williams is the sitting delegate representing Virginia’s 9th House District, serving on the Committees on Public Safety, Privileges and Elections, and Courts of Justice. Since redistricting, Williams is running for re-election in Virginia’s new 47th House District. Prior to his election as delegate, Williams served as chairman of the Patrick County Republican Committee (PCRC), where he increased membership, raised money, and flipped the board of supervisors and school board to Republican control – earning the Republican Party of Virginia’s “Unit of the Year” award. During the 2020 election, Wren traveled the country to help the Republican National Committee (RNC) and President Trump fight for election integrity in the courtroom in Wisconsin. In 2021, Williams made headlines when he challenged and defeated a 14-year incumbent by 26 points in the Republican Primary. Outside of politics, Wren lives with his wife, Britt, and son, Rhett, in Stuart, VA. Wren and Britt own and operate Schneider & Williams Law Firm.