STUART, VA – Last week, Delegate Wren Williams (R – Stuart) submitted letters advocating for 6 project grants that were voted on at the Virginia Tobacco Region Revitalization Commission Winter 2023 Meeting on January 5th. The Commission approved all 6 applications for grant funding of these projects, totalling $790,600 that will support farmers and economic development in Williams’ current and future districts. The amounts and recipients are as follows: 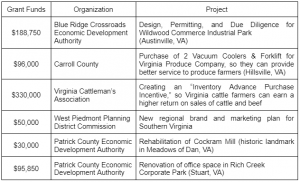 The following statement can be attributed to Delegate Wren M. Williams:

“These projects being funded is a huge win for our district. With input costs and inflation skyrocketing, our farmers have had a hard couple of years. These grants will be a boost to our farmers, helping them get the maximum dollar for their agricultural products that they’ve earned through their hard work.”

“For decades, we’ve been losing people, businesses, jobs – you name it. These grants will provide a boost to specific local businesses and help grow the overall economy in our region, making our area a better place to live and do business.”

“I am very thankful to the Virginia Tobacco Region Revitalization Commission for taking an interest in helping our localities and approving this funding. The applicants also deserve to be commended for doing the real work to improve our communities. I will keep advocating for more investments that will give our farmers and local economies a leg up.”

Wren Williams is currently the sitting delegate representing Virginia’s 9th House District, serving on the Committees on Public Safety, Privileges and Elections, and Courts of Justice. Since redistricting, Williams is running for re-election in Virginia’s new 47th House District. Prior to his election as delegate, Williams served as chairman of the Patrick County Republican Committee (PCRC), where he increased membership, raised money, and flipped the board of supervisors and school board to Republican control – earning the Republican Party of Virginia’s “Unit of the Year” award. During the 2020 election, Wren traveled the country to help the Republican National Committee (RNC) and President Trump fight for election integrity in the courtroom in Wisconsin. In 2021, Williams made headlines when he challenged and defeated a 14-year incumbent by 26 points in the Republican Primary. Outside of politics, Wren lives in Stuart, VA with his wife, Britt, where they own and operate Schneider & Williams Law Firm.